In order to ensure maximum reliability of the power supply for the final assembly, Airbus has implemented extensive reconditioning measures for the low voltage main distribution unit of its successful A320 family of airplanes. Based on technology from Eaton, an existing system was upgraded quickly and successfully to state-of-the-art standards in terms of monitoring, safety and personnel protection.

The Airbus site in Hamburg-Finkenwerder is the largest of the European aircraft manufacturer’s German facilities. Amongst other things, this site is where the final assembly of the A320 product family takes place. Production in the three final assembly lines in Hamburg takes place 24/7 in order to be able to respond to the high demand for this successful range of aircraft. Over twenty airplanes are built every month at the site. The assembly line stretches across four construction stations, which the aircraft runs through over a period of a few days as if on a conveyor belt. At these stations, for example, the sections of the fuselage are assembled and the wings, vertical stabiliser, elevators, engines, landing gear and seats are installed. In hall 9, which belongs to the final assembly line, the individual supply stations can be lowered or raised as needed, so that the aircraft can be moved freely in the hall between construction stations.

Maximising system availability and personnel safety
The low voltage main supply unit for hall 9 has used Eaton’s high-quality Modan switchgear for many years. As part of the reconditioning efforts, Airbus decided to upgrade the existing system to optimise the availability of the power supply. For the Airbus maintenance and energy team this meant ensuring maximum technical system reliability and the option of extensive system and component monitoring with a connection to the building management system, plus extended personnel protection. Replacing the entire system was not an option, because that would have meant several weeks of work and production downtime. The existing system had to be retrofitted. 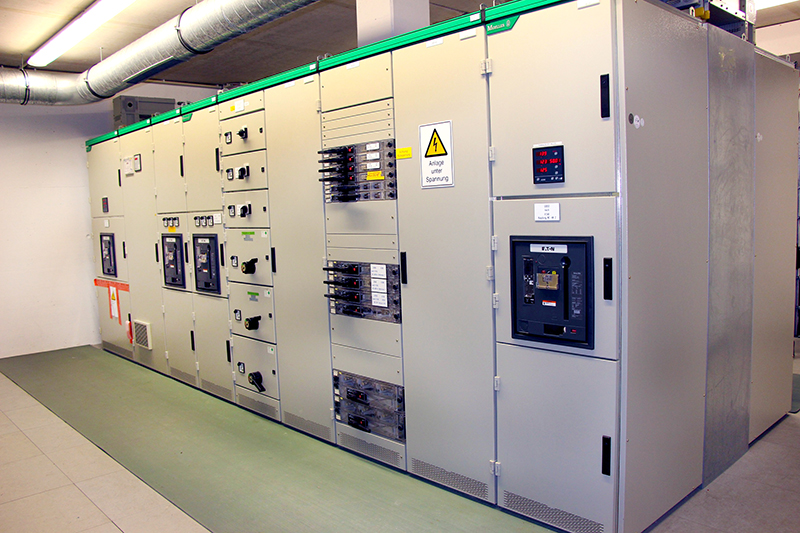 Retrofitting a complete solution
Within the context of the project, the aircraft manufacturer worked with Eaton to develop a complete solution, including switchgear monitoring and continuous temperature monitoring at critical points to an arc fault protection system. Eaton’s Moeller series IZM circuit breakers form the cornerstone of this solution, providing outputs from 630 to 4000 A with an electronic tripping unit and integrated measuring function. These circuit breakers are able to transmit detailed data to the BreakerVisu logging and visualisation system, in the event of
overcurrent, undervoltage or overload, for example. All existing NZM circuit breakers were included in the monitoring concept. This process was simple thanks to the intelligent SmartWire-DT connection and communication system. The direct connection of BreakerVisu to the building management system means it is now possible for the Airbus team to query all relevant power supply data in detail via web-based visualisation, so that deviations can be identified more quickly and errors can be promptly corrected.
Eaton’s diagnostic system for temperature monitoring also allows the temperature of critical areas of the switchgear be monitored continuously for the first time.
According to common practice and industry standards, Airbus conducted thermal imaging at regular intervals, but this approach only provides a momentary snapshot of a load situation. Furthermore, hidden points of the switchgear that are not easily accessible – like connections behind the main current switchgear –
cannot be monitored this way.

Eaton’s new solution is based on a control device (diagnostic controller), autonomous temperature sensors for monitoring all busbars and connection points, as well as versatile temperature sensors for monitoring all other measurement points. The temperature values are transmitted wirelessly to the controller at regular intervals (approximately every 10 minutes). This wireless connection simplifies installation and keeps the busbar area free from conductors. As part of the project, almost 80 temperature sensors were installed in the switchgear for hall 9.
Among other things, Eaton has saved the thermal thresholds for its Modan switchgear system in the controller. The thermal behaviour of the system was analysed in a number of tests and mapped out in mathematical operations accordingly. In the event of deviations, the system either generates a warning about the present error or triggers an alarm if certain thresholds are exceeded. These messages run via BreakerVisu to the control system at Airbus, so that an error can be corrected before a critical situation develops.
In order to enhance the main distribution unit in terms of personnel safety, and since Airbus has already had good experiences with Eaton’s Arcon arc fault protection system at another site, the system was retrofitted with the arc fault protection system here, too. Retrofitting was completed within just a few hours thanks to the new point sensors. 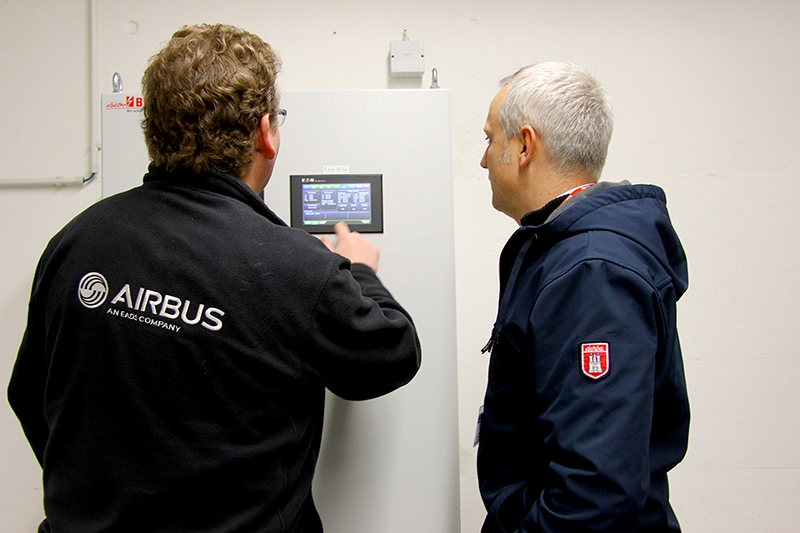 Maximum reliability and as good as new
After the successful implementation, Airbus was pleased with the outcome of the project. The concept that was developed in cooperation with Eaton proved to be efficient and provides the in-depth, detailed look into the system that the maintenance and energy team was expecting. The low voltage main distribution unit for hall 9 is now fully up-to-date in terms of technology. Implementation only took a weekend thanks to preparation and close cooperation with the production teams. The switchgear was shut down at 10 pm on a Friday in October 2015 and was ready to operate again by 6 pm on Sunday, so that production could start on time on Monday. After the retrofit, the system was re-inspected and recertified with a guarantee of 36 months, making it good as new. Based on this experience Airbus is now considering expanding the concept to additional halls at the Finkenwerder site.