The biogas plant in Vettin, located in the municipality of Groß Pankow, went into regular operation in April 2017. The planning office Green line from Flensburg is the general planner of the plant using input materials such as slurry, solid manure, and maize silage. The 8.5 megawatt biogas plant is operated by the biogas division of the technical contractors Osters & Voss from Wittenberge in the district of Prignitz.

Building on the existing 800 kilowatt biogas site which went live in 2014, the plant has been expanded further and focuses predominantly on a mix of cattle slurry and energy crops. The raw biogas is converted into bio-natural gas using physio-organic washing processes and then fed into the regional natural gas network of the Brandenburg utility company, E.ON-E.DIS.

To this end, three fermenters and two secondary fermenters with a fermenting volume of around 23,000 cubic metres in total have been installed at the biogas plant as well as six digestate storage tanks with a holding capacity of around 42,000 cubic metres. A pump line measuring approx. two kilometres in length ensures the efficient and ecological transportation of substrates, the slurry is delivered by a dairy farm directly to the biogas plant. 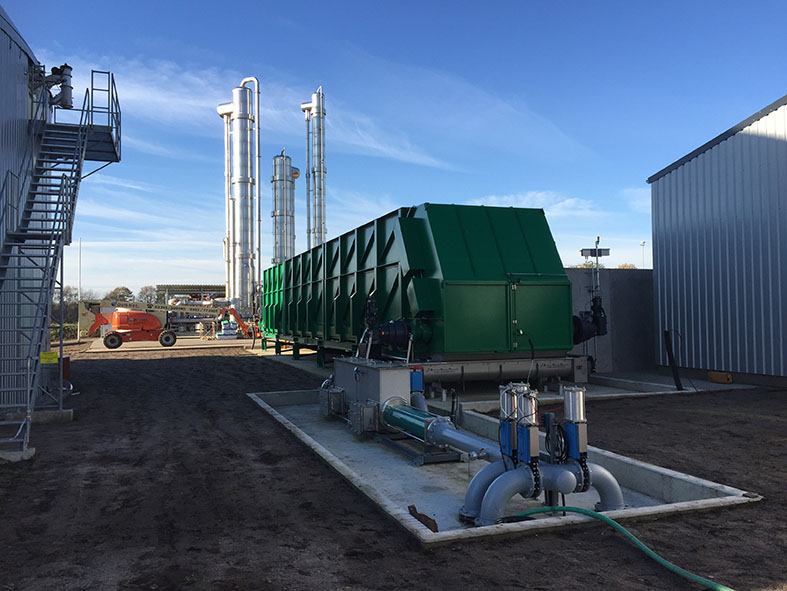 “With this layout, this biogas plant ranks among the largest in Germany in tank volume and gas production, particularly setting functional and operational benchmarks,” emphasises Greenline Managing Director, Frank Nielsen.

“High quality, low production and operational costs, and a high degree of automation in new construction and flexibilisation projects are all helping to establish biogas production as the standard energy alternative in the market of regenerative energy sources going forward,” adds Nielsen. In particular, thanks to the latest EEG amendment and the modified framework conditions for approval, efficient planning concepts and low building costs are fundamental to the chances of executing biogas projects.  Furthermore, waste plants for foreign markets with C02 certificates are becoming increasingly more important. Here too, competitive kWh generation throughout the operational period plays a decisive role.