“We want our fans to step in to our worlds and to feel like they’re a part of Honda Civic Tour: Future Now from the moment they enter the venue ’til the moment they leave,” says Demi Lovato. Nick Jonas adds, “We’re looking forward to creating an unforgettable experience that’s unlike anything else.”

Tickets for the 2016 Honda Civic Tour are on sale now. Starting at noon PDT today through midnight on March 28, a special Buy 2 tickets, Get 2 ticket offer will be available at Honda.us/2for2. To redeem the offer, fans can enter the special access code “DemiNickCIVIC” upon checkout.

The Honda Civic Tour also invites fans to power up their concert experience with The Power of Dreams sweepstakes. Starting today through August 27, one lucky ticket holder and a guest at each show along the tour will be selected for the ultimate backstage VIP experience, including an arena tour, a look inside Demi’s and Nick’s tour bus, a chance to walk on stage prior to the show and a private meet and greet with Demi and Nick. Fans can enter for their chance to win at Honda.us/tix. 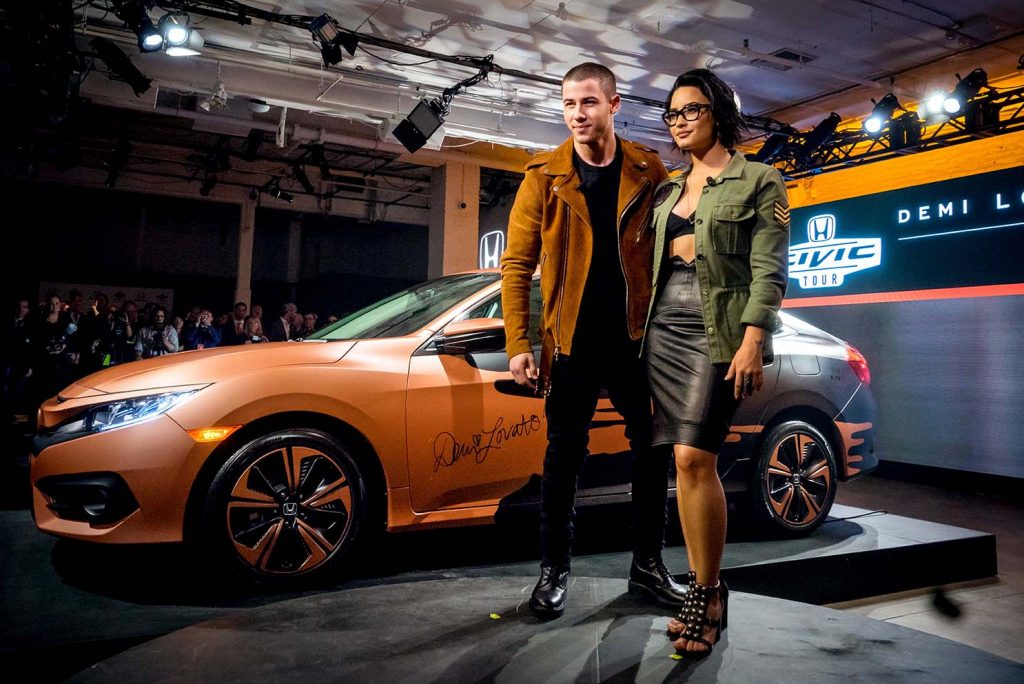 Continuing in Honda Civic Tour tradition and starting today through February 2017, fans will be able to enter to win a brand new 2016 Honda Civic Sedan designed and autographed by Demi Lovato, a Honda Grom motorcycle customized and autographed by Nick Jonas or (thanks to Honda Financial Services) a trip to the tour finale at The Forum in Los Angeles on September 17. More info and rules for all sweepstakes can be found on HondaCivicTour.com.

2016 marks the 15th Anniversary of the Honda Civic Tour. Over 4.2 million fans have attended Honda Civic Tour since 2001 to see 68 artists including One Direction, Maroon 5, Linkin Park, Fall Out Boy, Panic! At The Disco, blink-182, The Black Eyed Peas, Incubus and more.