Rockstar Energy Husqvarna Factory Racing’s Max Anstie has secured an impressive overall MX2 class win at the GP of Belgium, claiming two imposing race winning performances at the brutally rough Lommel track. Confident of strong results at round 14 of the 2016 FIM Motocross World Championship, Anstie didn’t fail to deliver and secured his first double moto winning result of the series to date. In doing so the Brit became the first rider to win three consecutive Lommel GPs.
Putting a high-speed qualifying race crash behind him Max pushed hard during the opening moto to claim a well-deserved win. Again battling against the soft, sandy track conditions in the second moto, he remained both fast and mistake free to put the finishing touches to a perfect GP by securing a second win.
For Anstie’s teammate Thomas Covington the GP of Belgium proved to be a difficult one. Struggling with lower back pain prior to the GP, two crashes in the opening moto resulted in a 17th place finish. Frustratingly the second moto was also a demanding one.
Following a poor start Thomas battled his way to finish 12th. Max Anstie: “I’m so, so pleased I got the GP win here at Lommel. The track was as brutal as ever but the work that myself and the team have been putting in really showed. I knew that if I kept away from mistakes I could get the GP win – and that’s what we managed to do. I knew my speed was good, and I think I showed that in the qualifying race, but crashing as heavily as I did certainly wasn’t part of the plan. The pace was really fast at the start of the opening moto and then when it started raining it really made things tough. Lommel’s soft anyway, but the rain just seemed to make it even softer. I kept pushing and got the win. Moto two was altogether different – the track was still tough but I just kept pushing to get that second win. I feel really good right now. Heading into the remaining GPs I really want to focus on the overall podium.” 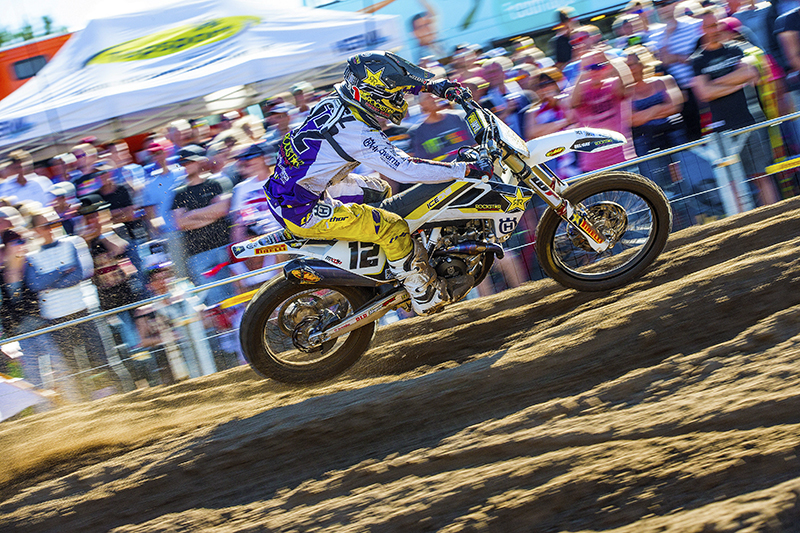 Conrad Mewse enjoyed two strong outings at Lommel despite a tough qualifying race. Running off track and dropping back to 20th, the British youngster fought back to ninth on Saturday, before going on to finish in 12th and 14th. Overcoming a poor start in moto one, Conrad claimed the holeshot in the second moto, running second for the first 10 minutes of the race.An overall MXGP class win was well within the reach of Husqvarna’s MXGP class rider Max Nagl at Lommel, as the German star continued the impressive form that took him to overall victory at the recent GP of the Czech Republic. Winning the opening moto, the FC 450 mounted rider was well placed to earn a second consecutive overall GP win until a simple fall in a slow speed right hard corner in the second moto resulted in him finishing seventh. Frustratingly for Nagl his 1/7 score resulted in a second overall result, just one-point from the top step of the podium.