Raimondi’s exclusive agent in France, GP Mat International (GP MAT), has completed the installation of six of the Italian manufacturer’s cranes in Saclay, a southwestern suburb of Paris. Under the direction of GP MAT President Frank Torchard, 10 of the company’s employees worked on the crane erections, including those with elevators.

“GP Mat always works in close collaboration with our clients in order to present the products best suited to their jobsite needs. Our teams of technicians manage the crane erections, and we work to ensure that the best processes are put in place to ensure safety and productivity for each contractor’s respective requirements,” explained Torchard. The jobsite, at MINES ParisTech (known historically as the École des mines de Paris), rated as one of France’s top universities, requires the cranes to be onsite and operational for various timelines, all between 18-24 months.

“It was imperative to have cranes with high lifting capacity on this site due to the heavy prefabricated components. The cranes will be used in the construction of a set of offices over five levels, and will be lifting form panels, concrete, and prefab elements over the duration of the construction process,” Torchard continued. The erection times of the six Raimondi cranes on the jobsite, which is being managed by contractor Cardinal Edifice, took approximately 16 hours for each crane over a period of two working days. 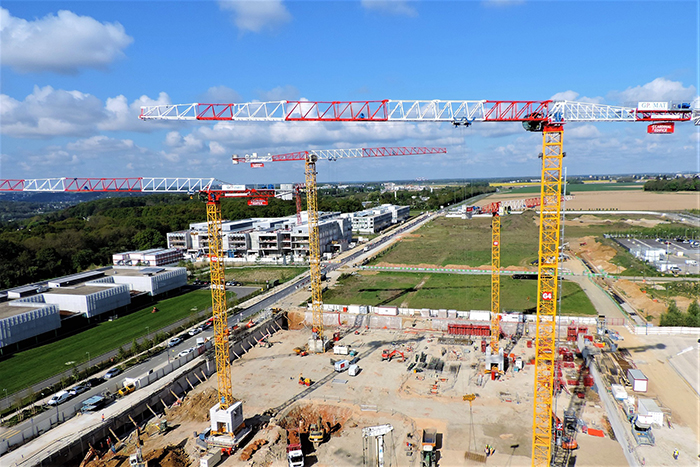 Based on a long-standing relationship between Cardinal Edifice and GP MAT, the contractor already owns a number of Raimondi cranes, but added to its existing fleet for this particular jobsite. “We have collaborated closely with Cardinal Edifice since 1999. Due to the heavy lifting requirements, we suggested the MRT294 for its strength,” added Torchard.

“With a lifting capacity of 16 t., we were certain that the jobsite would be best-serviced with this Raimondi model, in addition to the models already part of Cardinal Edifice’s fleet: the MRT223, MRT189, and three MRT243s at heights ranging from 34 meters to 52 meters.”

In accordance with French labor regulations, both cranes exceeding 50 meters in height were fitted with elevators. The total fleet assembled onsite, together with maintenance and disassembly, will all be overseen by GP MAT for the duration of the project.