With the launch of the new TS2 SCARA series, which is making its world debut at Automatica, Stäubli is entering a new performance class. The completely redesigned four-axis machine with proprietary JCS drive technology facilitates ultra-short cycle times. It also has a revolutionary hygiene design which opens up new possibilities for use in sensitive environments.

In answer to the question what the new model series has in common with the predecessor generation, Gerald Vogt replies pithily: “Nothing.” The Stäubli Robotics director waxes more lyrical when the topic turns to the innovative aspects of the new series: “We have given our SCARAs a complete makeover. They are now modular in design and, for the first time, incorporate our very own JCS drive technology which has been setting new standards in our six-axis machines. This technology is the key to the enormous performance gains of the four-axis TS2. Hollow shaft technology has made possible a unique cleanroom design which makes external cabling a thing of the past.”

The differences between the new robots and their predecessors are indeed immediately apparent. They are characterized by their compact, enclosed design with internal media and supply lines. There is no external bundling of cables and thus no irregular contours, sources of mechanical failure or avoidable particle emissions. Completely sealed housing, the quill optionally protected with a cover and affixed with special screws, concealed connections under the robot pedestal (if so desired), dead spaces systematically excluded: this is the epitome of modern hygienic design. 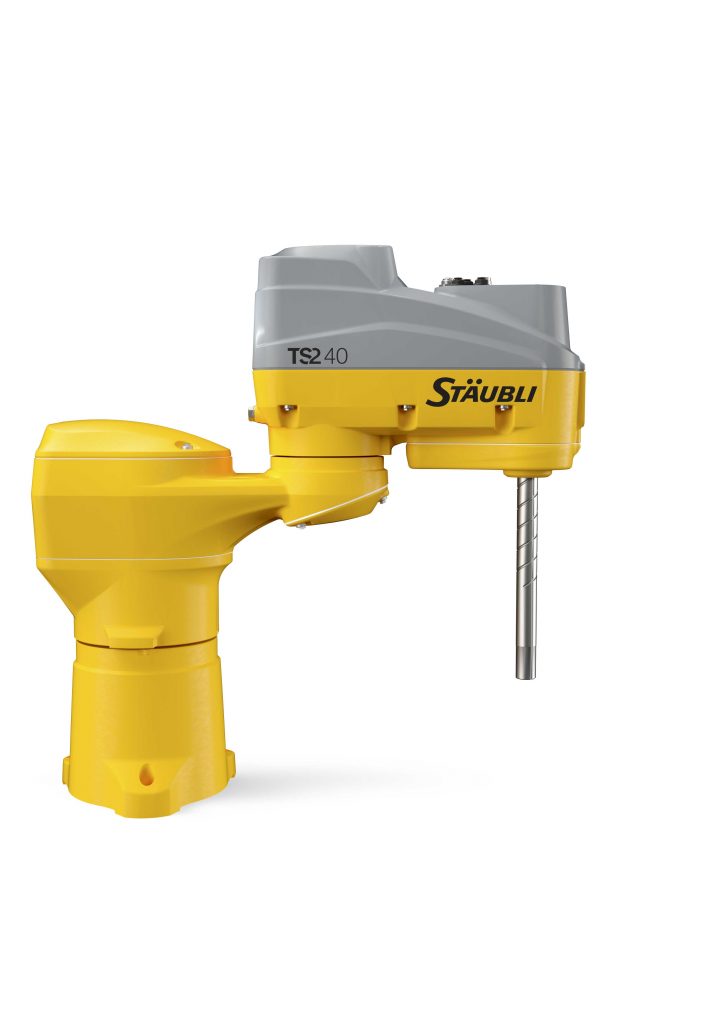 High speed SCARAs for all purposes

What the manufacturer is aiming for is clear: Stäubli is the undisputed market leader in the life science sector and intends to further consolidate this position with the new SCARAs. Shortly after the launch of the standard model, versions are to be made available that have been specially modified for pharmaceutical, medical and food applications as well as UL and ESD compliant variants. “Our new high-speed SCARAs are suitable for all purposes – and much more besides,” Vogt continues. “There are standard robots for all assembly tasks, but these can be upgraded with simple modifications for sensitive production environments, where they open up new application possibilities. I am thinking of applications subject to the strictest hygiene or cleanroom requirements, ranging from food and pharmaceuticals to photovoltaics. All TS2 models can be operated with food-grade H1 oil as lubricant without any loss of performance.”

In order to provide the best solution for all eventualities, the new robot family consists of four members, the TS2-40, TS2-60, TS2-80 and TS2-100. With the four-axis TS2-100, Stäubli has extended the working radius of the predecessor series (400 to 800 millimeters) to an impressive 1,000 millimeters. Overall, the new SCARAs are considerably more compact than their predecessors and are far less greedy in terms of space. And they have a bonus feature – for the first time, the four-axis machine can be ordered with an optional integrated tool change system. This allows the SCARA’s nimble grippers and tools to automatically replace themselves, thereby significantly increasing the uptime in certain applications. Another advantage of this system is that tools or grippers can be changed manually within seconds by means of the bayonet locking mechanism. All media and signal connections are automatic. 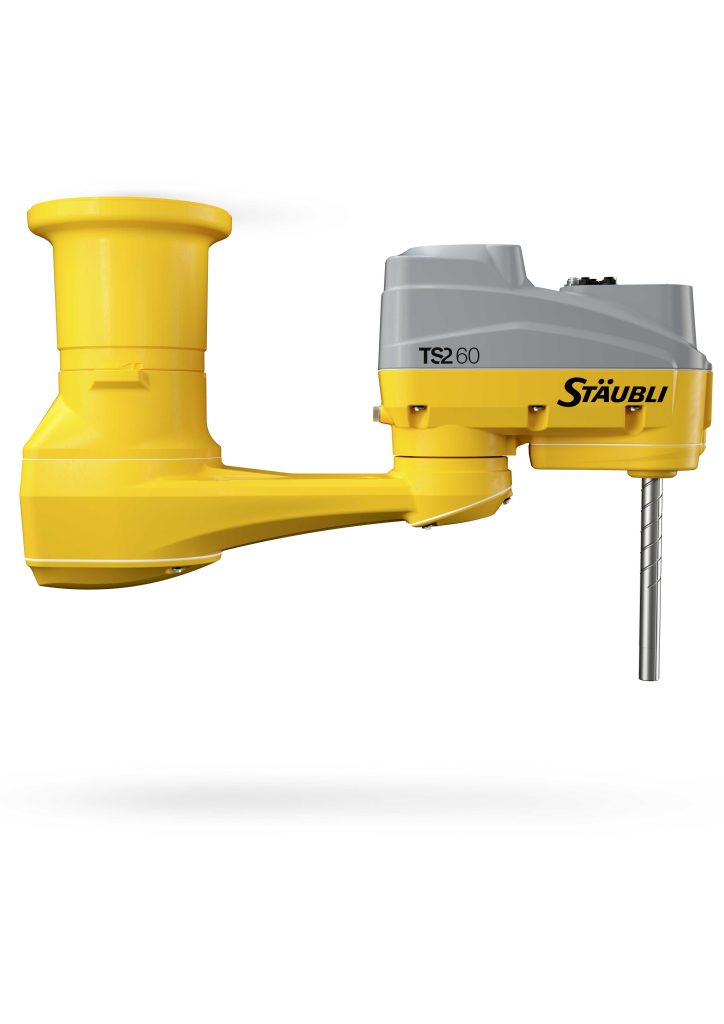 Close inspection of the four models reveals their common features. This is not by chance but rather the result of the new modular design. All machines have the same robot pedestal that the series shares with the six-axis TX2 generation. Also, forearms, axes and drives are identical on certain models. In the case of the forearm, the four models are equipped with one of two different versions, the smaller of which is found on the TS2-40 and TS2-60, the larger on the TS2-80 and the TS2-100.

Vogt explains the benefits: “First and foremost, we saw this modular design as a way of significantly reducing delivery times for the new SCARAs. In addition, we save unnecessary costs and rationalize our spare parts provision. We are now using our own JCS drive technology and in any case have a very high level of vertical integration as a matter of policy, which means we are no longer dependent on the reliability of certain component suppliers. Users will therefore not only be pleased with the high performance of these machines, which are now faster, quieter and more accurate, but will also benefit from shorter delivery times.”