The HOMAG Group broke new ground at the last LIGNA with its fully interlinked and networked plant stretching over 100 meters. Now the experts are taking another step forward in plant construction at LIGNA 2017. This means: The HOMAG Group is continuing to focus on the issue of digitalization in the woodworking industry and is actively driving this forward. To that end, the experts from Schopfloch are also increasingly active in research projects — for example, in IUNO, the national reference project for IT security in Industry 4.0. Data backup is becoming more and more important for customers as networking in production grows.

One of the exhibits at LIGNA is a batch size 1 plant with plenty of extras — both in machine and plant technology, and in networking. Although the individual machines aren’t interlinked this time, what is impressive is the networking and the consistency of the data and the technical solutions of the individual components. The high-tech furniture production plant incorporates numerous components that the user currently requires along the process chain (and will continue to do so in the future) to produce customized, top-quality furniture to meet the most stringent standards:

The sheer amount of space that the TLF 411 provides when combined with processing machines and in the panel variants makes it a true all-rounder among storage systems. A particular feature is the huge range of material that can be moved by the storage system; it really makes no difference whether it is used with plastic, plexiglass, laminates, coated or uncoated panels.

The award-winning cutting cell has revolutionized batch size 1 production and captivated visitors as far back as LIGNA 2015. The HPS 320 will be on display again in 2017 — with plenty of new options that will interest even more user groups. Which ones specifically is a secret for now. If you’d like to have a guess, watch the product video at www.youtube.com/holzma for inspiration.

Edge processing with Profi KAL 610 and an unprecedented circulation system

The heart of the batch size 1 plant is an edge cell that is used at the trade fair to produce a range of kitchen parts in a variety of dimensions, colors and materials — live. The edge cell offers fully automated parts handling with an impressively high level of performance, speed and efficiency. And the TFU 820 workpiece circulation demonstrates an unprecedented style of return. 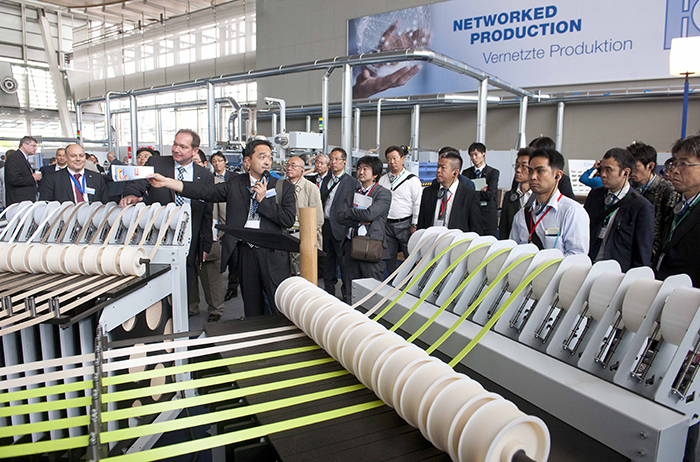 Drilling and fitting insertion technology with the ABF 600

A CNC complete cell with robotic feeding is used to process the fronts and ensures that the most delicate elements of the furniture are handled carefully. The ABF 600 completes the processing professionally and efficiently, irrespective of whether the fronts are to be drilled or have fittings inserted — or both.

Operating the machine with powerTouch

The HOMAG Group’s operating system was presented for the first time four years ago; since then, all machines around the world have been equipped with the powerTouch control system. As a result, the machines in the batch size 1 plant that is used at LIGNA also have uniform control elements and software modules, so they can be operated in the same way.

The new generation of cell control system was launched as a world innovation at the last XYLEXPO. It is now being used at LIGNA to network all the machines in the batch size 1 plant. The control system is designed to be modular and has been standardized so it is uniform for all HOMAG Group plants. It is more than capable of handling future requirements, changes and expansions, especially when it comes to production using complex and fully networked plants. woodFlex ensures the safety of users, creates transparency in the sequences and reduces the error rate. This control system optimizes sequences, ensures a certain standard is maintained (even when different cells are used), and significantly increases efficiency. woodFlex represents another step for users towards the future of networked production as part of “Industry 4.0”.

bosch CASE CASE Construction Equipment cat construction Deutsche Messe dubai engineering fair hannover messe industry Industry 4.0 Ligna logistics manufacturer manufacturing middle east samoter technology the big 5
EasyEngineering.eu uses cookies to improve your experience on this site and provide you with services and content tailored to your interests. By continuing to use this site, you agree to the use of cookies. Accept Reject About cookies Settings
Privacy & Cookies Policy