The revolutionary SCM cell produces furniture components completely automatically by combining the best production technology available with latest generation software, and as a result, it has just won the most prestigious prize in its sector: the AWFS Visionary Award.

Scm is currently celebrating a number of remarkable results at the AWFS Fair, the largest North American show for woodworking machine manufacturers on the West Coast that has just ended in Las Vegas, Nevada. The company’s “Lean Robot Cell 4.0” won the “Visionary New Product Award” in the Industry 4.0 category that was only added to the competition this year.

With its Lean Robot Cell 4.0, Scm thrilled Las Vegas with a completely automated wardrobe component production system, served by two anthropomorphic robots, which means that only one, not necessarily expert, operator is required to operate it. The “Lean Robot Cell 4.0” consists of a Morbidelli M600 nesting workcentre, a Stefani edge bander and a drilling centre. The cell uses standard, high performance, easy-to-use machines, operates automatically when the job is launched and has been specifically designed to integrate with the customer’s production management system. The result is a system that can perform all the various machining stages, from semi-machined panels to machined panels. At the end of the process, the individual finished panels are also grouped by robots on special carriages, ready to be assembled in the CPC clamp. The cell can produce up to 500 wardrobe panels every shift. 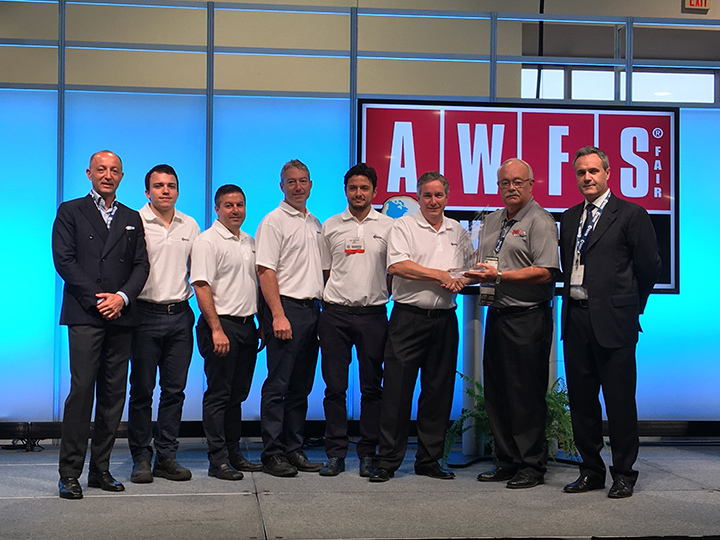 The “Visionary New Product Award” confirms yet again the technological excellence of Scm production and the capacity of its Engineering division to design and create truly innovative systems. The fair awarded nine different prizes for which 33 products were shortlisted as finalists from a total of 27 companies.

To sustain this growth Scm is doing major investments to reinforce the service level offered. The Mexican branch has been extended in recent months, the group’s head offices in Atlanta are being restyled and the new base in Carson, just south of Los Angeles, is now ready for operation. All this means that the SCM now boasts a leading business network on the West Coast. In fact, the group’s direct and indirect presence has grown across the entire area of North America and Mexico, and an ambitious expansion plan has also been launched in Canada.