Basalt Rock Composite FZE has won the overall prize at the 2015 GAIA Awards for its basalt composite rebar at a prestigious award ceremony held during The Big 5 at Dubai World Trade Centre on 24 November 2015.

The UAE-based company is currently exhibiting its innovative basalt products at Middle East Concrete, one of two co-located shows at The Big, and will receive US$50,000 in the form of marketing support for its basalt fibre-based rebar after beating competition from close to 300 entries to win the top prize at the 2015 awards.

“I felt we might win our category, but we had no idea we would win overall. It’s a great honour. We are so happy to have won,” explained Eyeene Zhirkova, General Manager at Basalt Rock Composite.

Basalt fiber rebars are made out of basalt rock, which has a naturally high chemical and thermal resistance. It is also one of the strongest natural silica rocks.

Such properties allow for its use in concrete reinforced bridges, tunnels, water barriers, beams, road surface, aircraft landing strips, and other building constructions where steel bars might otherwise be subject to humidity, salt, and alkali environments.

Basalt fiber rebars are also more ecological than other composite materials, with some of its benefits being that natural gas and electricity can be used in furnace feeders, little waste is produced, no chemicals or mediums are required in manufacturing processes, there are no hazardous agents in air or water.

The award was presented by Josine Heijmans, Event Director for The Big 5 2015, who said: “We welcomed 40 per cent more entries than we had in 2014.”

Safdar Badami, Managing Director from Al Muqarram Industries, one of the finalist for the Coatings Adhesives & Sealants category said: “The Gaia Awards acts as a great platform for us to promote what we have done from a sustainability standpoint.”

“It is also a great opportunity for us to enhance our products to make them more environmentally-friendly in the future,” he added. 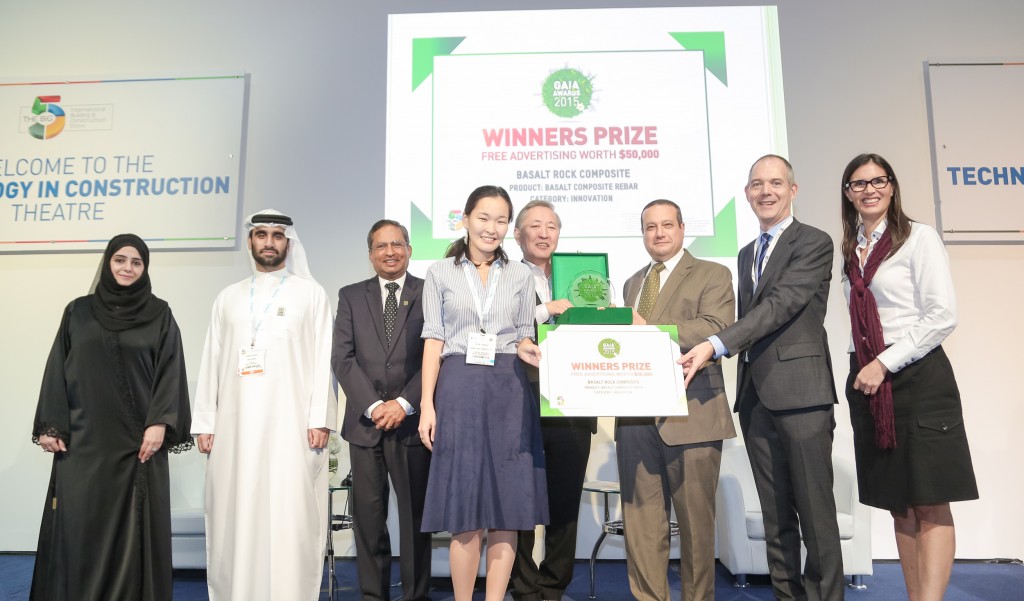 Now in its eighth year, the GAIA Awards has grown into the industry’s most respected awards honoring those construction equipment and products that have truly integrated the concept of moving towards a more sustainable built environment.

The awards are open to exhibitors at The Big 5, Middle East Concrete, and PMV Live, as well as other companies not exhibiting at the show.

Two selections rounds were held by an impartial judging panel that rated submissions based on their potential to impact people, planet, and profit. Following which winners from six categories  were chosen, including Coatings Adhesives & Sealants, General Construction, HVAC, Marble Stone & Ceramics, Windows, Doors & Cladding, and Innovations.

Speaking after the ceremony Nathan Waugh, Event Director for Middle East Concrete said: “To have an exhibitor from Middle East Concrete win the 2015 GAIA Awards is a tremendous endorsement of the show and the caliber of the companies and products at the event, and I would like to congratulate Basalt Rock Composite on their success.”

Basalt Rock Composite FZE will be exhibiting their award-winning rebars on stand MEC H174 at the Middle East Concrete exhibition hall. The show, along with The Big 5 and PMV Live, will run for another two days at World Trade Centre, concluding on the 26 November 2015.