Under the motto “Making history – building the future,” Wacker Neuson celebrated its 60th anniversary in North America at this year’s CONEXPO-CON/AGG. At the same time, it presented its future capability with innovative new products.

Conexpo 2017 fell on an anniversary year for Wacker Neuson: The company has been active with its own affiliates in the US for 60 years and in Canada for 50 years. In 1957, Wacker Neuson began the production and marketing of construction equipment in the US as its first foreign affiliate company. “When Wacker Neuson looks into the future in North America, the company stands on a sturdy foundation of sixty years of experience and a profound market knowledge, which offers us enormous opportunities for growth,” says Cem Peksaglam, CEO of the Wacker Neuson Group. “As the most important trade fair in our industry in North America, Conexpo offered us an excellent opportunity to look into the future with our customers, dealers and partners. We were able to exhibit innovative solutions that make our customers’ work on the construction site easier today, and in the future.”

Johannes Schulze Vohren, Regional President of Wacker Neuson in North America, adds: “Overall, the show was very successful. We were able to welcome many interested contractors to the booth as well as talk with existing and potential dealers. Our live demonstration show was an excellent way for us to illustrate how our products can benefit the user with their special features and performance efficiency.  The improving economic situation also had a positive impact.” 128,000 visitors and more than 2,800 exhibitors were represented at this year’s trade fair.

Visitors to the Wacker Neuson stand were impressed by the action-packed demo shows and interactive stations. For example, they had the opportunity to participate in the “VDS Challenge” and in the process convince themselves of the advantages of the Vertical Digging System (VDS). The system for Wacker Neuson compact excavators compensates for height differences in uneven ground conditions at the push of a button, thus providing for more productivity and comfort. An area for the topic of after-market with advice on financing solutions, service, attachments, spare parts, training and many other topics completed the trade show appearance. The Wacker Neuson Merchandising Shop was also well-attended. 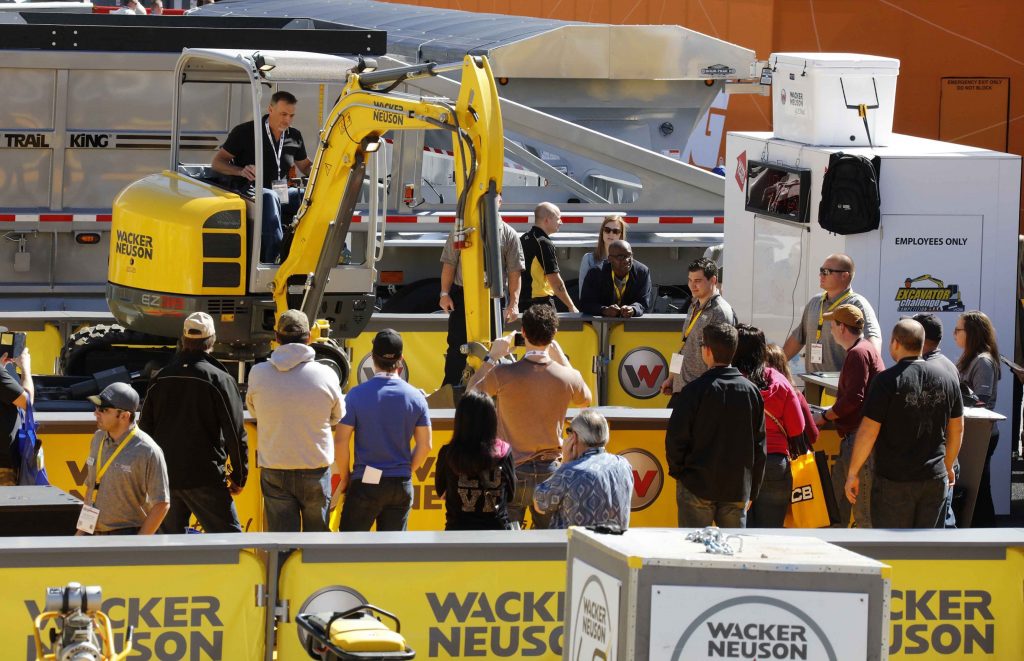 A highlight at the show was the products of the zero emission series. The line is making Wacker Neuson a pioneer in emission-free construction machines. In addition, the company exhibited the new excavators of the six to ten ton class at Conexpo as well as compact zero tail excavators (with zero tail swing). Visitors to the Wacker Neuson stand could also familiarize themselves with the comprehensive portfolio of wheel loaders, tele wheel loaders, telehandlers, and dumpers from Wacker Neuson. Within the range of compaction, the ride-on tandem and combination rollers for soil and asphalt compaction with an operating weight of 1.5 to 4.5 tons and the new soil compactors of the 5- and 7-ton class were presented. With the comprehensive roller portfolio, but also with the vibratory plates and rammers from Wacker Neuson, customers always get the machine that ideally fits the compaction requirements of their construction site.

Wacker Neuson makes this promise to its customers around the world with a comprehensive range of construction equipment, compact equipment and services rendered. The company has always owed its leading market position to unconditional customer orientation as well as the reliability and power of innovation of its products and services. In this spirit, Wacker Neuson was able to impress customers, potential customers, and partners at Conexpo 2017.