The German plant manufacturer WELTEC BIOPOWER recently signed the contract for a biogas plant extension of the milk powder producer Estancias del Lago (EDL) in Uruguay. From late 2018, the plant with its eight digesters will generate a rated thermal input of more than 6 Megawatt from cattle manure and fodder leftovers. The company will use the biogas for drying and steam generation purposes in the production process.

Founded in 2007, the agricultural company EDL now farms an area of about 37,000 ha. On this area, the South Americans grow maize, sorghum and soya as feed for their approximately 14,000 dairy cows. The company foundation was accom­panied by the establishment of a huge site in Durazno, north of the capital Montevideo. Apart from the cowsheds with milking centres and feed silos as well as the biogas plant, the premises now host a dairy and a grain mill. In Durazno, Estancias del Lago produces about 20,000 t of milk powder a year for export. Most of the milk solids are sold to China, Brazil and the Middle East.

In 2013, WELTEC had set up the first 800-kW biogas plant for EDL. Back then, expansion plans were already being considered. First, however, more cattle were needed. In the meantime, the number has therefore been stocked up from 8,000 to 14,000 cows. Now, 1,365 t of cattle manure plus 8.4 t of feed leftovers are available for the energy generation.

In view of the dimensions of the AD plant, the structural preparations already started in September 2017. In early 2018, WELTEC BIOPOWER will begin installing the six new 5,000-m³ stainless-steel digesters and the two 1,050-m³ pre-storage tanks for the slurry. With WELTEC‘s custom-developed process control system CeMOS, the entire biogas plant will be fully automated from the end of 2018. 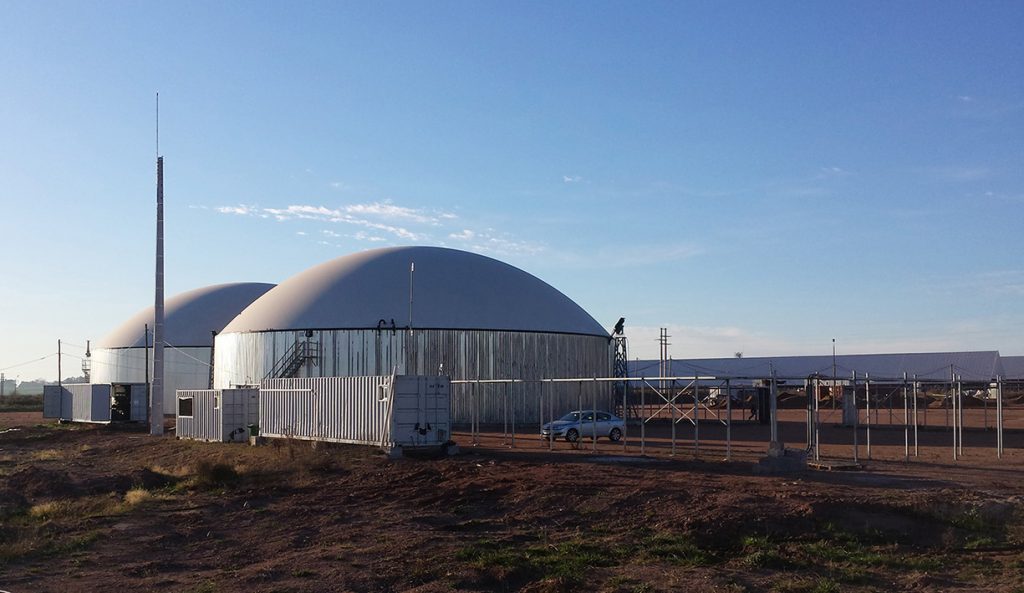 „As was the case back in 2013, the main reasons why the company opted for us were the high requirement profile and quality standard“ explains Jens Albartus, Director of WELTEC BIOPOWER. For the plant expansion, the customer thus again wants to make use of stainless steel. „We wanted to work with an experienced manufacturer with industrial expertise“, explains Franz Cifuentes, Director of EDL. Equipped with experience gained in the construction of large biomethane parks such as the one in Könnern, Germany, WELTEC is in charge of the entire building site management in Durazno, including the ancillary work.

Two gas boilers use part of the 30,000 standard m³ of biogas that is produced every day to generate heat for the biogas process. Most of the biogas is transferred to the close-by milk powder production facility via a pipeline. The biogas covers up to 35 percent of the heat required for the drying process. 100 percent of the steam needed is generated with biogas.

All operational units of the entire site are run in a very sustainable way. EDL contributes to this by growing its own fodder. The digestate from the biogas plant is used as fertiliser. Moreover, the cylce is closed by raising its own dairy cows and processing the milk on site. At the facilities located just 150 m from the cowsheds, the milk is processed to powder within four to eight hours. Another synergy has been established between EDL‘s fuel production and other parts of the business: Apart from soya oil for the biodiesel plant, the oil mill yields press cake that is fed to the animals.