A new Raimondi MRT223 topless tower crane was erected in Dublin, Ireland, during a one-day period by Irish Cranes & Lifting (Irish Cranes) with four of the company’s expert technicians onsite for the duration of the install. Situated in Dublin 2, fronting onto Charlemont Street and Charlemont Mall on the Grand Canal, the MRT223 will be supporting the build of the new Clayton Hotel Charlemont.

The four-star hotel, one of the more ambitious and high profile projects currently underway in Ireland’s capitol, is planned to be a five-storey structure boasting 180 superior rooms, a restaurant, and a coffee dock overlooking the city’s Grand Canal. The Dalata Group jobsite is under the design and build purview of reputed industry contractor McAleer & Rushe, now marking an impressive 50 years in the development business across the United Kingdom and Ireland.

“Irish Cranes was chosen for this prestigious development due to our second-to-none service, and the high quality of our for-hire fleet of Raimondi cranes,” explained John Kenny, Service Manager, Irish Cranes. “The Raimondi MRT223, with a HUH [Height Under Hook] of 32 meters on foundation anchors, a jib length of 60 meters and a 12 tonne maximum lifting capacity, will be onsite for approximately 60 weeks.” Kenny added that the MRT223 was chosen for its reliability onsite, fast erection time, and the crane’s durable wind-resistance properties. “As a flattop crane, the MRT223 catches less wind than other heavy lifters making it ideal for use at a waterfront property. Fitted out with the Raimondi Deluxe R16 air conditioned cabin, the MRT223 also ensures the comfort of crane operators – a top jobsite priority in construction as it reduces operator stressors thereby increasing safety.” 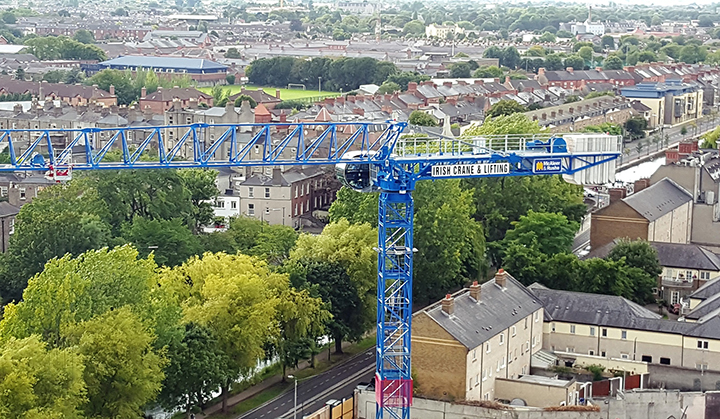 The MRT223, equipped with Raimondi zoning and anti-collision systems and the Trimble GS320 Wireless Wind Speed Display for the jobsite office, is tasked with lifting the development’s rebar, shutters, and skipping concrete. “One of the main challenges is that the crane can only work in the jobsite vicinity, so to respect those parameters we’ve set up the Raimondi zoning system to the site boundary. The crane was erected using a partial lane closure while maintaining traffic flow and the safe re-route of pedestrians,” Kenny said.

The second time in less than 12 months that Irish Cranes has been engaged for a highly-anticipated development in the country; in 2016 the company was listed by industry-authority Cranes&Access magazine in the competitive “Top 10 UK Tower Crane Companies” ranking for its superior work, detailed delivery, and its advanced heavy lifting machinery offering.