In the age of speed, all things move fast, work must be done in a very short time, and the equipment we work with must, of course, to keep up. And this applies to any area of activity, including the repairs and electrical projects. So just imagine: what if, instead of three large equipment difficult to handle and with a narrow range of operations you can use a single device easily and quickly, which can be handled in (almost) any conditions? Even when it is necessary to cut electric cables to crimp terminals or punch holes in walls or automation of switchboards? In addition, developed and manufactured right in Romania? Well, the solution exists and comes from RIDGID.

In January 2016 it was launched on markets worldwide RE-60MLR, equipment developed and manufactured in Romania. This is the smallest and lightest handheld hydraulic device for crimping in its class, weighing only 2.8 kg. It requires a reduced force for operation and can crimp very quickly (due to the RIDGID® RapidAdvance System ™) up to 300 mm2.

RIDGID is however not at the first model from the range of this practical equipment. In the spring of 2014, the first product from the RIDGID range of tools for electricians was launched and the model RE-60 would revolutionize the way entrepreneurs cut cables, could crimp terminals, punch holes in walls or automation of switchboards. This equipment, developed and manufactured by RIDGID in Switzerland, is able to perform all these operations by simply replacing a specific head for each operation.

In the same period, in Cluj-Napoca, inside the production unit of RIDGID, a team of engineers began developing products for electricians, with the objective of producing the smallest, lightweight and efficient equipment for manual hydraulic crimping electrical terminals. Therefore, last summer there was launched the first product in this range, model RE-130M, a manual hydraulic equipment, developed and produced entirely in Romania destined for markets worldwide. 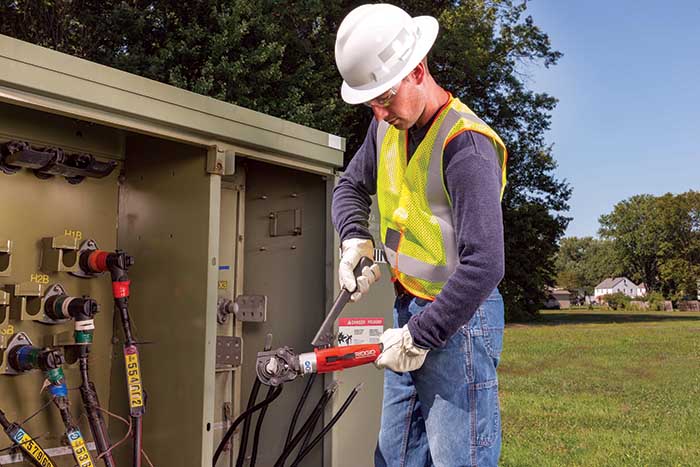 RE-130M can crimp electrical terminals with a maximum section of 400 sq. mm, developing a constant force of 130 kN. Also, through the innovative design of the head support that attaches to the front of the device, it was solved a serious problem for operators. It allows crimping electrical terminals while the tool is on a flat surface. The RIDGID® RapidAdvance System ™, for which RIDGID holds the patent ensures you reach the crimp position with two pumps, which significantly shortens the duration of execution of the operation. Also, Romanian engineers realized the easiest device in its class, weighing only 5.3 kg. Another important advantage is the price for a device manufactured to the highest quality standards and the most modern equipment that is equipped with production facility in Cluj RIDGID. The team of engineers in Romania is still developing interesting projects for new products for electricians and Energy contractors.

RIDGID – brand owned by Ridge Tool Company – is the leading manufacturer of electrical and hand tools, in its portfolio also entering equipment for cleaning pipelines and over 300 types of tools used in plumbing, HVAC / R, diverse industries, energy, oil, utilities and commercial areas.

Subsidiary of Emerson Commercial & Residential Solutions ™ – Ridge Tool Company is present in Romania since 2005 and the beginning of production took place in 2008. Ridge Tool inaugurated in 2007 in the campus of Emerson ™ Cluj-Napoca, the first RIDGID regional Center in Central and Eastern Europe, including a production plant, a Training and Technical Support Center, a showroom and a Customer Service Center.