The new CASE CX750D crawler excavator, the largest and most powerful machine in the CASE range, is bigger, stronger and faster than its predecessors, the popular CX700B and CX800B. It is designed and built to deliver faster cycle times and maximise productivity in the most demanding mining, heavy construction and earthmoving applications.

Two CASE customers based in the Eifel region of western Germany were among the very first to experience the massive performance and reliability of the new CX750D in their operations.

Backes Bau- und Transporte GmbH chose a CX750D in Mass Excavation version for its Dockweiler basalt quarry. Thomas Backes explains: “The material is extremely hard and it takes considerable strength to break it and crush it. For this reason, when we choose an excavator the hydraulic power and breaking force are of particular importance. Knowing this, the CASE store in Andernach recommended the new CX750D ME featuring a shorter boom and arm, which allows for greater breakout forces.”

The CX750D ME has now delivered more than 300 hours of operation in the basalt quarry, delivering a consistently impressive performance. Thomas Backes is already very satisfied with his CX700B, which has delivered an annual output of 250,000 tonnes without a single failure since its purchase in 2011. Based on this positive experience and the CX750D ME’s performance so far, he has high expectations for his new machine: “We expect the CX750D ME to deliver a comparably consistent performance as our CX700B over the long term. And, just like its predecessor, we expect this 75 tonne excavator to achieve a similar flow rate as a 100 tonne unit.” 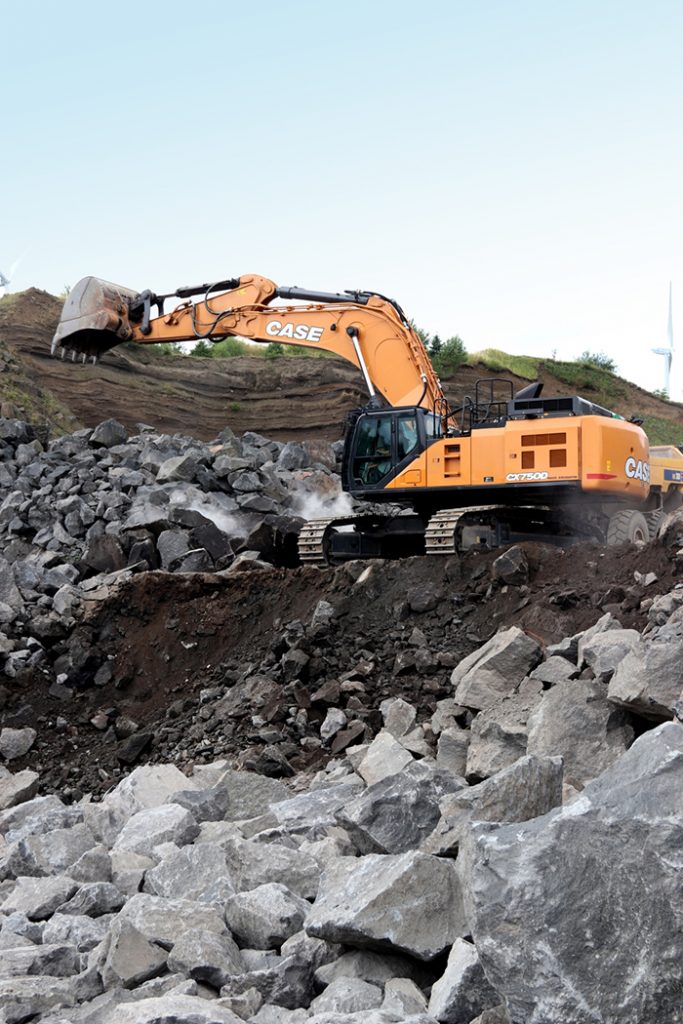 The CX750D shows its versatility at Bierbrauer und Sohn GmbH

Bierbrauer und Sohn GmbH in Kretz approached the purchase of its new CX750D with very different requirements: while it was needed primarily for their quarry in Ettringen, it would also be used in earthmoving, material handling and demolition works. Also, as CASE machines are typically very intuitive and fast to learn, they plan to offer the new excavator as a rental unit. This meant that versatility was of primary importance.

Karl-Werner Bierbrauer explains the reasons for his choice: “We wanted to use our excavator for as many different jobs as possible, so we chose the standard mono boom with quick-coupler for use with concrete shears and hydraulic hammers, and a 2.9 m3 HD Rock bucket for the quarry.”

Bierbrauer is a loyal CASE customer who has had very good experience with C- and D-Series excavators. In fact, the company’s fleet counts 10 CASE excavators with operating weight ranging from 28 to 37 tonnes, 7 models with weight up to 15 tonnes, as well as wheel loaders and compact equipment. For this reason, when the time came to purchase a new crawler excavator, CASE was the first choice.