On geographically tough terrain such as in the Swiss Alps, asphalt paving is a challenge in itself. Extreme slopes, narrow roads and steep precipices place demands on the paving team and the machine technology alike. In the mountain village of Castiel, located in the Arosa district in the Swiss canton of Graubünden, HEW Bauunternehmung AG opted to use the SUPER 1803-3i wheeled paver for the rehabilitation of the combined base and surface course on a farm track.

Located at an altitude of around 1,200m, the construction project featured an extreme slope of up to 11%. To make matters harder, the farm track was only designed for vehicles up to 18t in weight. This was just the job for the innovative wheeled paver of VÖGELE‘s “Dash 3“ generation.

In Castiel, the high traction and manœuvrability of the SUPER 1803-3i were particularly impressive. “That makes working on extreme slopes almost as simple as on flat terrain,“ said Paver Operator Oliveira Rodrigues Hugo. With its powerful drive and material handling system, it was easy enough for the HEW paving team to complete the construction project in one shift. The short set-up times of the paver also contributed to this. 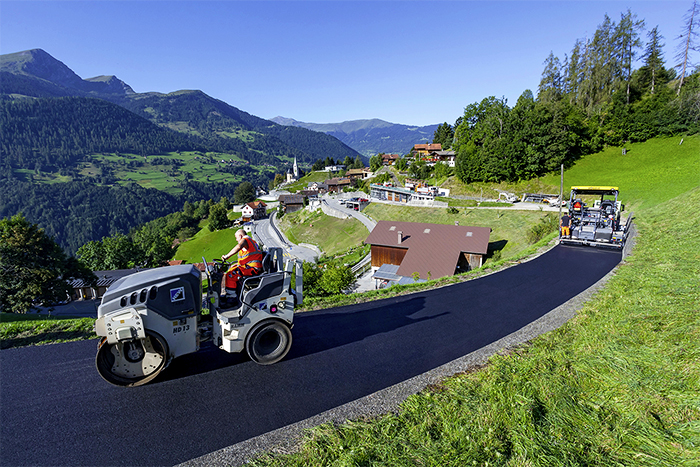 VÖGELE sensors for grade and slope control, for instance, can be connected according to the plug  &  play principle: the VÖGELE Niveltronic Plus System for Automated Grade and Slope Control detects the connected sensor automatically. The screed operator then just defines the specified values using the quick set-up function – and the work can begin. When its job is done, the paver also makes a quick exit: the SUPER 1803-3i can travel at up to 20km/h under its own power.