Fraport AG, operator of Frankfurt Airport, renews the surface course on the runways about every seven years, including the center runway, the most-frequently used section. Reason enough to assign key positions on this project to Wirtgen Group machines. The various tasks – in this case milling and paving the surface course – would normally be standard activities, if it were not for the extreme time pressure and high quality requirements. The job, after all, involved the central runway (4 km long, 60 m wide) at Europe’s third-largest airport. To disrupt air traffic as little as possible, work had to proceed extremely rapidly and reliably. The general contractor, Heitkamp Erd- und Straßenbau GmbH, had a timeframe of only 60 hours to complete paving. A total of 20,000 t of material were processed in total.

To complete milling work as quickly as possible, GMS Fahrbahnsanierungen GmbH put four Wirtgen large milling machines, with milling widths of 2 m and 2.20 m, to work on the runways. With a total output of some 3,500 PS / 3,452 HP (2,600 kW), these high-performance machines milled 80,000 m² of asphalt on the 2.6 km-long and 31 m-wide strip to a depth of 5 cm. The milling job, including surface cleaning, was completed in 19 hours.

The W 210i and W 250i in particular are capable of achieving unusually high milling performance levels thanks to their two separate diesel engines. At the same time, these large milling machines use energy very efficiently thanks to WIDRIVE, all while going easy on the environment as well. Another plus: The engines are mounted in what are known as “silent blocks” that isolate them from vibration and dampen noise. This protects the milling machine operator against excessive vibration.

Once the large milling machines had completed their work and the surface was cleaned, an adhesive layer was applied as a base for the new asphalt layer. Asphalt paving was then carried out in two night-shifts between 5 p.m. and 7 a.m. At this time of night, the 35 trucks in operation could deliver the asphalt without being held up in the usual congestion that occurs around Frankfurt Airport. 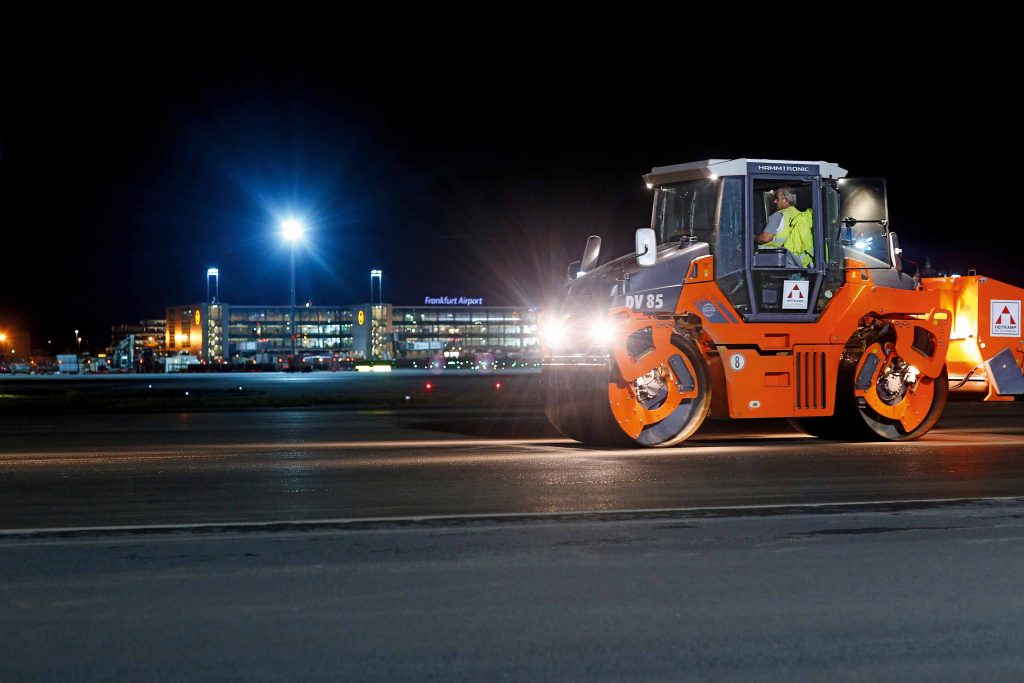 Each night, the Heitkamp crew paved 40,000 m² of an AC 11 D S aggregate-rich asphalt. Engineer Axel Konrad, Project Manager for Fraport AG, explains why: “Material with a high aggregate content offers high resistance to grain break-out, which is critical for aircraft, because dislodged stone particles could otherwise damage the sensitive engines. Another reason is that abraded rubber from the aircraft wheels can easily be removed from this material.”

Four pave trains comprising Vögele pavers and feeders paved the surface, together achieving about 500 t an hour. The time pressure in this phase was likewise tremendous.

Fraport had stipulated the use of feeders in its invitation for bids, because the surface accuracy of the center runway is of critical importance to the airport operator. “Feeders are just ideal here because they prevent jolts and joints in the surface,” says Project Manager Konrad. Engineer Jörg Pigorsch, Heitkamp’s Senior Site Manager, therefore deployed four Vögele MT 3000-2i high-performance feeders at the site. They can take on an entire 25 t load of mix from a truck in just 60 seconds.