DHL has completed another landmark transportation project with the delivery of a black rhino from its birthplace in the Czech Republic to its natural homeland in Tanzania. Three-year-old female Eliska was moved to a natural park in Tanzania as part of an ongoing conservation project run by the George Adamson Wildlife Preservation Trust, aimed at helping endangered animal populations to grow and prosper in their natural habitat.
Eliska’s move was overseen by an international DHL team, comprising around 40 specialists in areas ranging from ground transportation and aviation to customs clearance and certification across at least five countries. The 900 kilogram female was transferred from ZOO Dvur Kralove in the Czech Republic, where she was born in 2012, to the main DHL European Hub in Leipzig, Germany. She was then loaded on to a dedicated 28-ton Boeing 757-200 freighter, specially modified for animal transport, and flown more than 6,500 kilometers directly to Kilimanjaro Airport in Tanzania, from where she was transferred by truck to her new home.
“The delivery of Eliska to Tanzania continues a proud tradition at DHL Express of supporting international animal conservation efforts,” said Ken Allen, CEO, DHL Express. “We were very
excited to have the opportunity to transport this beautiful animal home to Africa and to play our part in these critical efforts to help revive endangered Eastern black rhino populations. Complex projects like this, where failure is simply not an option, also allow us to showcase the power of the DHL global network and the expertise of our certified international specialists.” Along the way, she was accompanied and monitored by a team of support staff, including Dr. Pete Morkel, one of the world’s leading black rhino veterinarians. Five containers of food and water supplies were also loaded for the journey. 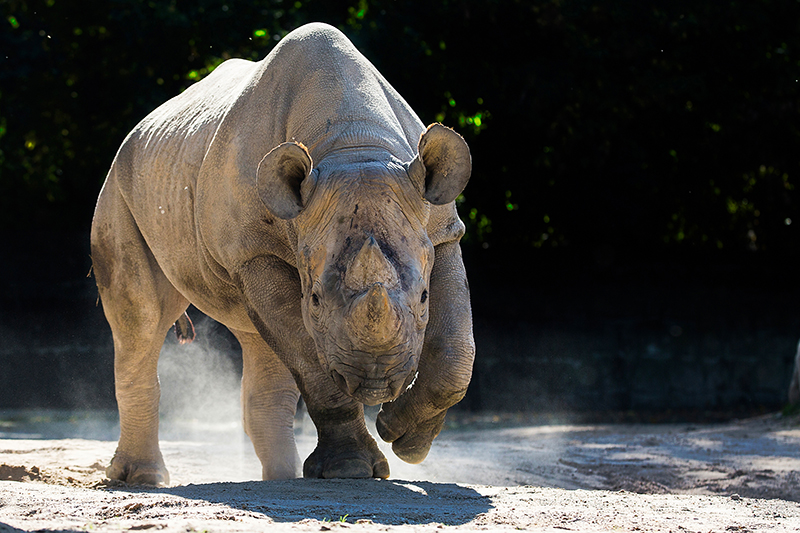 “We were delighted that DHL was able to support us with this project, as we were only prepared to entrust Eliska to partners who could absolutely guarantee a safe and seamless move,” said Tony Fitzjohn OBE, Field Director, The George Adamson Wildlife Preservation Trust. “Having the support of an experienced team of international transport specialists allowed us to focus without any distraction on the comfort and well-being of Eliska and to ensure that she had the best possible introduction to her new life in Africa.”
Eastern black rhinos are one of the most endangered mammal groups, with large-scale poaching in the late 20th century leading to a significant decline in black rhino populations in Africa. There are estimated to be about 800 in the world today. ZOO Dvur Kralove, where Eliska was born, has a strong record of breeding Eastern black rhinos, with 43 calves of the species born to date.
“Eliska’s departure is a bitter-sweet moment for ZOO Dvur Kralove. We are sorry to say goodbye to one of our much-loved animals, but at the same time, we are extremely gratified to have played a part in this important conservation project and excited to see how she adapts to her natural habitat,” said Přemysl Rabas, Statutory Director of ZOO Dvur Kralove. “The build-up to her move to Tanzania has involved years of careful preparation, and we are sure that – with DHL – she is in the right hands for the journey.” DHL has supported a number of major conservation projects in recent years, including the delivery of three black rhinos from the U.K. to Tanzania in 2012 and the delivery of two rare Sumatran tigers from Australia and the U.S. to London Zoo in the same year as part of a breeding program. A 2013 project to transfer two giant pandas from China to a Belgian sanctuary resulted in the ‘perfect delivery’ in June 2016, when the female gave birth to a panda cub.