Based on years of Swiss experience in nano-hydraulics Ridgid launched an innovative device for crimping lugs for electric cables. 70 years ago in Sissach in Switzerland Von Arx Company was founded, which began production of equipment for concrete floors finishing. Von Arx engineers began developing in the late 90s electro-hydraulic pressed copper plumbing fittings and stainless steel. After a few years, in 2001, Ridge Tool Co., a division of Emerson American, acquires the Swiss company and invests in the research of nano-hydraulics. From that moment until now, the equipment for pressing fittings made by the Ridgid brand manufactured in Switzerland are becoming increasingly smaller in size and weight, but with a growing performance. Today, the new equipment from Ridgid are revolutionizing the work of electricians, allowing three operations with a single device.

This equipment includes a series of innovations from Ridgid, starting with the new quick-change system of the three heads (cutting, crimping and punching), a small size and weight of only 1.5 kg, an ergonomic shape and the new 18V batteries 2.0 and 4.0 Ah. Battery cycle charge time has dropped to 20 minutes for the 2.0 Ah and 40 minutes for the 4.0 Ah.

The Ridgid device for crimping electric cable slippers RE-60 revolutionizes the work of electricians, allowing three operations with a single device. No more investment is needed in three separate crimping lugs equipment from 6 mm² to 300 mm², the electric cables being cut up to 50 mm in diameter and punching holes up to 65 mm diameter, in the walls of electrical cabinets.

In addition, for those working in the workshop production of electrical panels, Ridgid provides a network feeder of 5 m at 230 V which can be mounted in place of the battery, thus ensuring uninterrupted operation caused by the charging cycle.

A complete set comprising of a RE-60 device and three heads, two batteries and a charger intelligently recognizing previous generations of batteries Ridgid, costs 2.990 EUR + VAT, and the version that includes only the crimping head, batteries and charger costs 2,390 EUR + VAT. 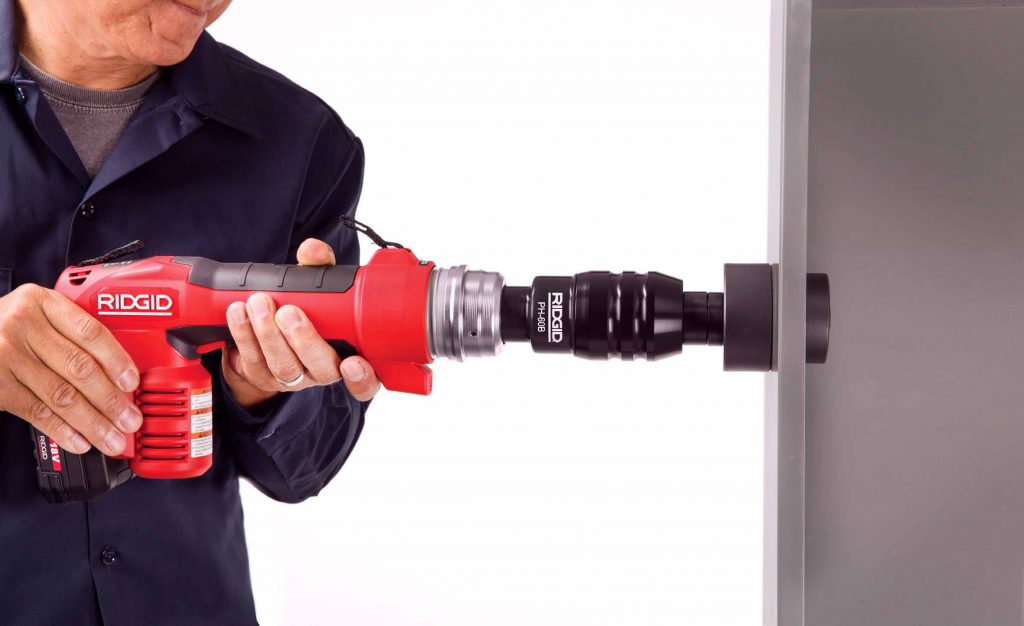 The offer includes jaw crimping from 6 mm² up to 300 mm², punches up to 65 mm diameter and a crimping jaws head for square blocks, with a maximum capacity of crimping 240 m².

The Ridgid brand owned by Ridge Tool Company, is a leading manufacturer of hand tools and power tools, in its portfolio entering also tappers and cleaning pipeline equipment and over 300 types of tools used in plumbing, HVAC / R, industries, energy, oil, utilities and commercial field.

Emerson Professional Tools subsidiary, Ridge Tool Company is present in Romania since 2005, where it began producing in 2008. Ridge Tool ushered in three years ago, the Emerson Campus in Cluj-Napoca, the first Regional Centre of Ridgid in Central and Eastern Europe, including a production plant, a Center for Training, Technical Support, a showroom and a Customer Service Center.