In October 2015, the construction work for an anaerobic digestion plant from German manufacturer
WELTEC BIOPOWER started in South Korea. The plant site is located about 80 km north of the capital
Seoul, in Gyeonggi-do province. The 450-kW biogas plant is to go live in the early summer of 2016.
The highly developed technology with smart control will ensure a high level of efficiency of the
second South Korean WELTEC plant.

In South Korea, major investments are made in the energy sector, and the development of renewable
energy sources has been a top priority for several years. For good reason: The republic with its population of 51 million is one of the world‘s 10 largest power consumers. However, the country does not have any significant fossil resources and is forced to import 97 percent of its conventional energy sources.
One of the reasons why WELTEC BIOPOWER attracted the attention of the transformer manufacturer,
who assumes the role of investor and operator of the new biogas plant, was that the German plant
manufacturer had already built a biogas plant in the south of the country back in 2012. However, the
customer‘s final decision in favour of WELTEC was based on the fact that the technical plant concept for
the new project is custom-tailored to the region‘s special needs and South Korea‘s ecological goals. “The
sustainable waste disposal concept and the efficient processing of the input substances into high-nutrient
fertiliser were decisive factors“, explains Harro Brons, the project manager of WELTEC BIOPOWER. 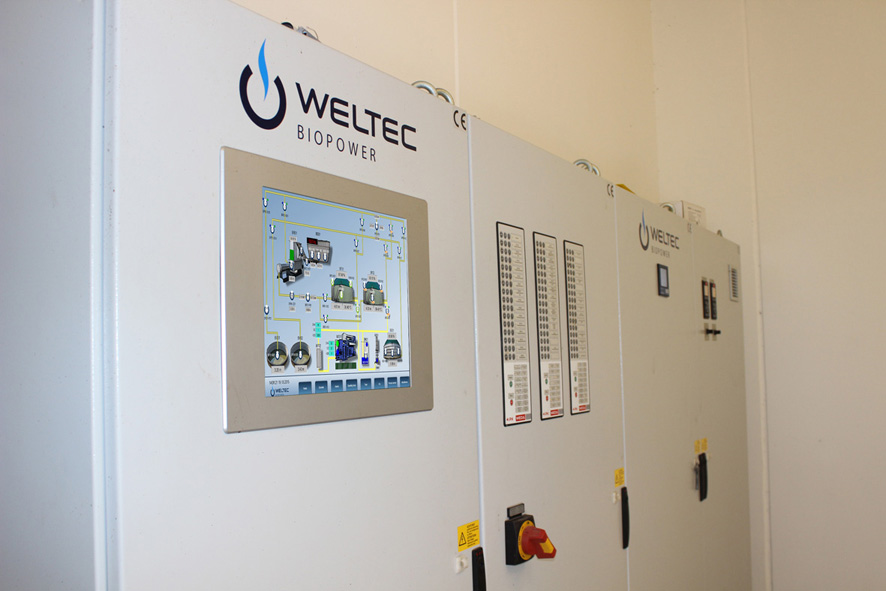 Starting from the early summer of 2016, the operator will supply the stainless-steel digester with its
capacity of almost 4,000 m³ with 100 tons of organic waste a day, whereof 70 % are pig manure. This
feedstock will be converted into biogas and high-quality fertiliser by anaerobic digestion. Subsequently,
the fertiliser will be stored in two stainless-steel digestate storage units of 5,590 m³ each until it is used.
The generated biogas will be used to operate a combined heat and power plant with an electrical output
of 450 kilowatt. The power will be fed directly into the power grid. The heat will be used for heating the
company buildings and for internal processes.

Doubtlessly, the key to the high performance of this biogas plant is the deployed technology. In South
Korea, the optimum function of the components will be controlled by the PLC-based LoMOS control,
which is custom-developed by WELTEC. The precise plant control enables a high degree of automation
and optimum remote maintenance. To make the user interface as user-friendly as possible, a special
detail has been taken into consideration: “For this project, we programmed the control in Korean“, says
Harro Brons. Thus, the basis has been established for the smooth operation and the first steps to achieve
South Korea‘s energy goals.