SibWoodExpo was held at the SibExpo Centre in Irkutsk city from 11 to 14 September 2018. With this year marking its 25th anniversary, the trade fair was co-organized for the first time by Deutsche Messe (represented by its Russian subsidiary Deutsche Messe RUS) and Sibexpocentre OJSC. The trade fair focuses on the primary wood industry: equipment, technologies and materials for logging, woodworking and wood-based house construction.

Exhibitors at the event included 000 DMI Forest (Ponsse), KAMI Group, ILIM Group, NARDI INTERNATIONAL MOSCOW, Ministry of Forest Industry of Irkutsk Region and Ilim Bratsk, as well as the local representative of Michael Weinig AG, LINCK GmbH and Esterer WD GmbH from Germany, Veisto, HewSew and HEINOLA from Finland, and AS Hekotek from Estonia. The outdoor exhibition space was home to companies such as Ponsse and John Deere.

The organizers had prepared an interesting supporting program, which featured live demonstrations, training opportunities and talks by high-caliber guest speakers from a range of organizations, including the Fraunhofer Institute Braunschweig, Rottenburg University of Applied Forest Sciences, the Board of Trustees for Forestry Work and Technology (KWF) and industry representatives such as LINCK.

Numerous representatives of state organizations were present when the trade fair was opened by Alexander Bitarov, First Deputy Governor of the Irkutsk region, alongside representatives of Deutsche Messe and its Russian subsidiary. A total of approx.1,000 visitors attended SibWoodExpo 2018. 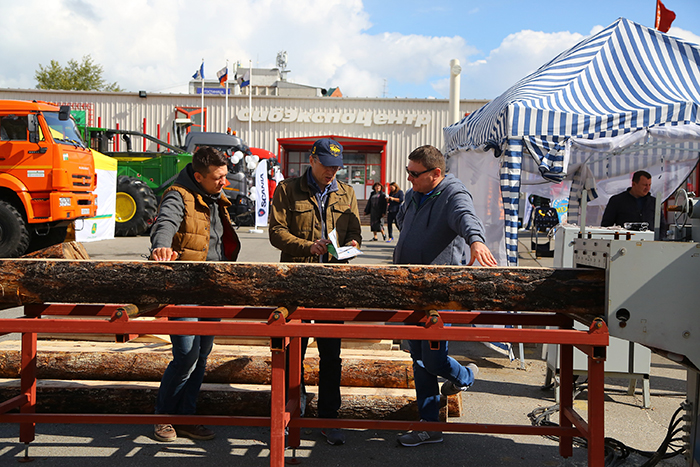 “There is certainly potential for a forestry trade fair in Russia”, says Christian Pfeiffer, Global Director LIGNA & Woodworking Events at Deutsche Messe based in Hannover, Germany. “With its huge timber reserves and in particular the Irkutsk region, the center of the forestry industry, Russia is one of the most promising markets for German and international forestry and woodworking machinery. At next year’s SibWoodExpo we will be refining the concept and holding the trade fair for the wood and forestry industry where the raw material is. To pursue our new practice-driven approach, we will be partnering with the Board of Trustees for Forestry Work and Technology (KWF). Technical demonstrations in the forest are among the events planned.”

The next SibWoodExpo will be held in Irkutsk from 10 to 13 September 2019.